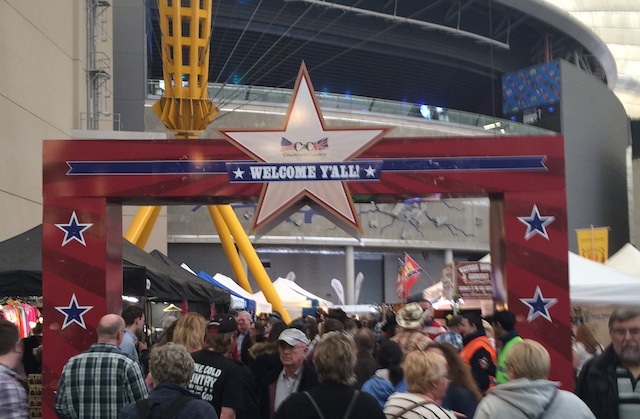 Photos by the author

In the middle of East London’s o2 arena, for one weekend only, you can buy your choice of just about anything with a Confederate flag on it—shirts, bedspreads, key rings. There’s a pop-up store called Navahopi selling Native American arts and crafts, next to which stands a sprawling table stacked up with nothing but cowboy hats, swarmed by Londoners taking pre-purchase selfies. The bar sells sazerac and sweet tea. Everything smells like beef.

This is The Town Square, the centerpiece of this year’s Country2Country festival, a two-day celebration of modern country music that’s plowing through Europe before summer hits. For the third year running, it’s sold out all 20,000 of its tickets way in advance. Many purchased their tickets 11 months ago, long before the first acts had been announced.

All of this seems implausible at first, not only because it’s so culturally incongruous but also because many of the bands heading up the bill—Florida Georgia Line, Jason Aldean, Luke Bryan—are frequently reviled and sneered at by so many back home in the States, where they are dismissed as party music or “bro-country.” In a recent review of Florida Georgia Line and Jason Aldean’s tour for the Dallas Observer, for instance, critic Jaime-Paul Falcon claimed he’d “gladly endure” Ebola rather than relive his experience at the show, watching as the two acts “gleefully danced on the grave of one of the most purely American forms of art.” Among the many things Europeans might choose not to import from the US, this type of entertainment would presumably be near the top of the list.

Country music has always been a supremely American art form and, as with many American inventions, it is defended staunchly. The storytelling at its heart relies heavily on its locale and, probably for that same reason, it’s never really grown beyond its star-spangled borders. And it doesn’t give a shit, either. It’s not there to expand. Laura Marling might channel Dolly Parton here and there, Gillian Welch may have shows broadcast to middle-class viewers on BBC 4 late at night, but real engagement with country and the world around it has, understandably, remained a truly stateside phenomenon.

In the last couple of years, with the rise of bro-country and its reliance on the holy trinity of long tan legs, ice-cold beer, and American-made trucks, country music appeared to be closing itself off yet further. Even as the genre showed some sonic progression and a further embrace of pop sensibilities, the subject matter was more localized than ever before.

Put simply, long tan legs aren’t easy to come across here in the UK; we don’t get half enough sunlight. For that same reason we’re kind of fine with warm beer—we even prefer it sometimes [Ed. Note: Ew.]. And what Americans call “trucks” really aren’t all that popular because we just don’t have that many ol’ dirt roads.

In fact, most of the time, the o2 Arena and the urban sprawl around it couldn’t be further away from the trappings and contradictions of modern country music. And yet here I stand, in the midst of bustle of The Town Square, smelling like beef. 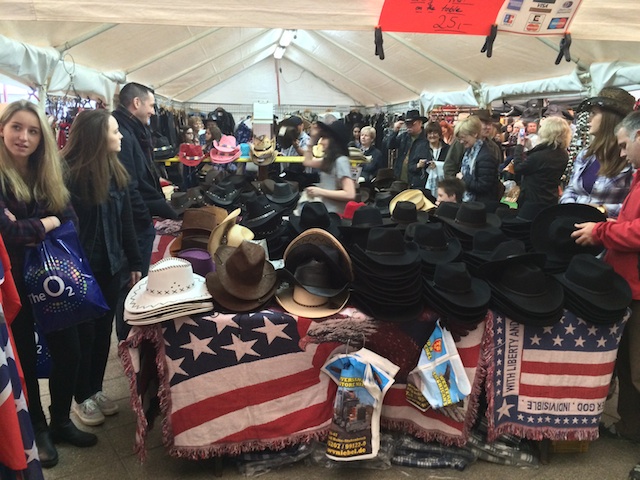 “We don’t walk around on ordinary days dressed in Western hats,” Noel and Jeff, two fans I’ve accosted in the venue’s cramped smoking area, tell me. They’re both dressed like Colonel Tex from The Simpsons, their accents are British through and through, and like pretty much everyone here, they’re incredibly charming, welcoming folk.

“You get prats shouting ‘Yee-haw’ at you as you walk past if you do that. But the interesting thing you do find… is people will look at you as you start your journey, but once you start onto the Jubilee Line [on the London Underground] to come here, you find the other people become the minority in the carriage.”

Noel and Jeff are the last people who might be expected here for a showcase of modern country’s luminaries. They are old-school aficionados of the country aesthetic, a million miles from the spring break vibe that many of this weekend’s acts court so successfully. But they consider themselves a part of a transatlantic tradition, part of an England that “has always had aspirational ideas to what America has done historically.” 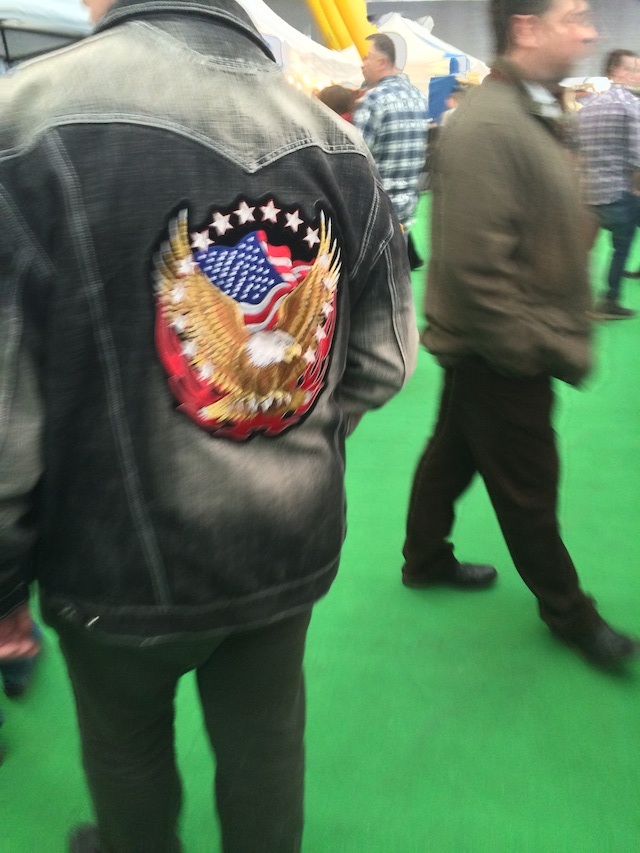 “If you look away from country,” says Jeff, Britain has “always wanted to buy into that lovely American ideal. And that could be anything from how Christmas is run to a choice of lifestyle.” This sentiment is beginning to take hold, too. Try to ignore the fetishists seeking out their Confederate flags or pieces of Native American jewelery, and you’ll find a core of these unlikely and passionate people, those who have fallen in love with an America fed to us over here through speakers and screens.

Take Ben Earle. Earle is one half of British duo The Shires, who last week became the first British country act to crack the top ten. They’re also the first British band to sign to Decca Nashville, a bastion of country music. He says he was baffled the first time he heard the word “truck” in a song, coming to country music as he did in his mid-20s. “Now it’s second nature to me to hear that word,” he says.

Earle talks about hearing pop-country trio Lady Antebellum’s “Need You Now” as an epiphany—“the most freeing, liberating moment of my life”—after which he realized that country was a viable mode of expression for an English singer-songwriter. It shows on the album, too. Its first single “Nashville Grey Skies” harmonizes about building a home for country music somewhere in England, and “State Lines,” the album’s strongest cut, is a shameless, unabashed love song to the USA: “I love all the little things / Like when you roll your eyes like a cool New Yorker / Driving across the Mason Dixon line, / I gotta smile, / Cos you’re warm like a night in a Southern summer, / Sweet like a taste of California wine, / I love crossing your state lines.” 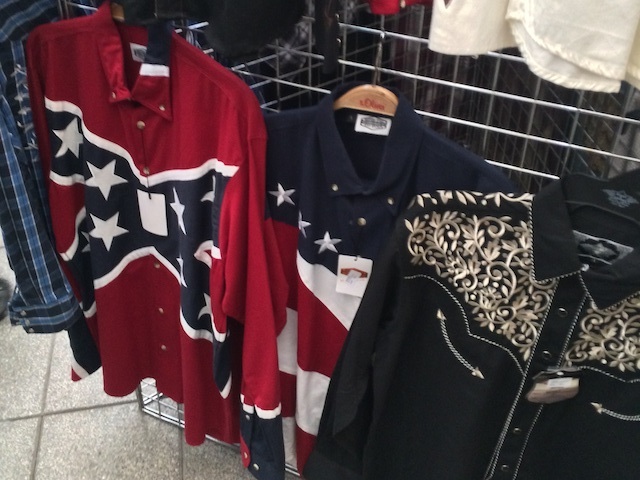 For Earle it’s an aesthetic and a lifestyle that should be embraced. “It’s about bringing that spirit over and having that vibe,” he says. “It’s about that honesty and that storytelling and about being proud to be who you are. And just great songs. Everything starts with the songs.”

More than a transatlantic cultural conversation, in the growing British country scene, there’s a full embrace of American ideals, whether or not we’ve constructed those ideals in our own Old World minds. Holloway Road, a duo named after a major London thoroughfare, is another member of the British country scene borrowing from the New Country aesthetic. They say they “try to get as many songs with banjos in them as we can” and that “if we can get a pedal steel then we’ll try it. But there aren’t many people this side of the Atlantic that play them.”

They traveled to Nashville last year for the Country Music Awards on a sort of pilgrimage, but now, with the growth of the genre in England, they’ve realized that England might do just as well. “We definitely thought we needed to be in the States,” says co-frontman Robert Gulston, “but now not so much. Other bands are opening up doors for us to stick here and get successful. The country scene here, he says, is strong: “If we all stick together, it’ll keep growing.” 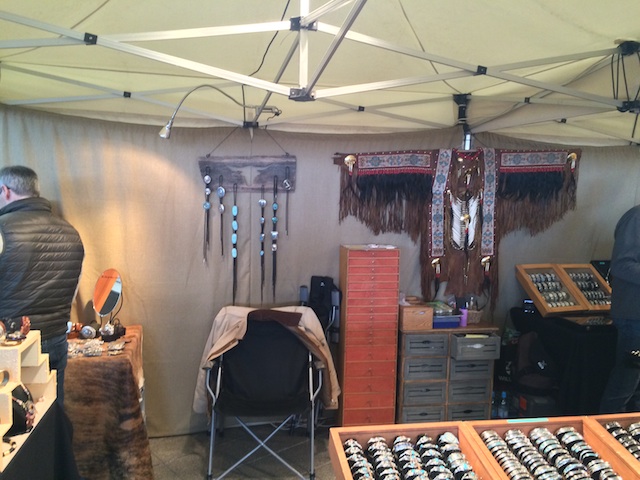 All of this is a direct result of country’s modern heroes. For bands like The Shires and Holloway Road— even for the older generation like Noel and Jeff—there’s no rift between new and old, no argument to be had with purists, no image of FGL and Jason Aldean dancing on graves. “Over in the States” says Gulston, “I’d imagine the older generation only sticks to their Hank Williams and that sort of stuff, whereas over here I think country is just country as a whole.”

Earle says he hasn’t really listened to that much classic country, that he’s “not as educated as I probably should be… There’s so much music out there.” For Earle, as with the members of Holloway Road, albums like Kacey Musgraves’ Same Trailer, Different Park changed the game. So running back to the canon doesn’t seem all that essential.

Just like the NFL, C2C will return to the UK next year and leave behind a trail of Bud Light cans and fast food wrappers, and most of the UK will frown at it, deeming it to be a celebration of unrefined American culture. As with the NFL though, England has begun the unlikely process of gaining some Major League representation all of its own.