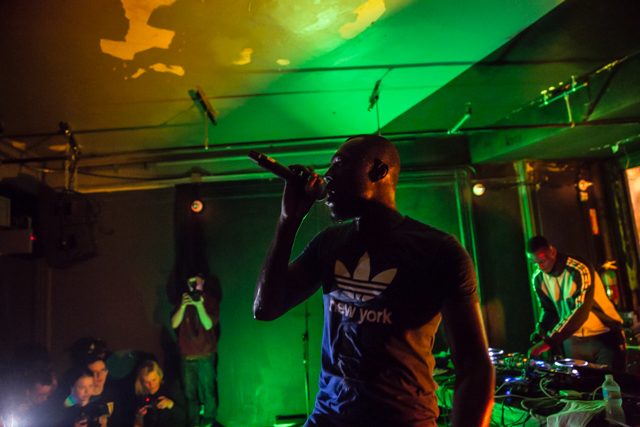 Every heavyweight champion needs an opponent. Tonight Stormzy is gassed at the soundman—his choice of word, not mine.

Since the Croydon-bred 22 year old made his way through the crowd to the stage—hood pulled down, surrounded by a five-man entourage—he’s been raging at the man behind the booth. Every track he lines up is cut after a minute or so. At first it seems like he’s reloading, but by the third time asking he seems genuinely pissed he’s not able to play his songs louder. Truth is, it sounds fine from halfway back; his vocals are raging above DJ Tiny’s beats and the energy he’s putting in—and the energy he’s demanding from the crowd—is coming through loud and clear.

But still, Stormzy is trying to turn up the volume on every track, pushing the crowd, the mixing desk, and the Market Hotel’s elastic wooden floor to their limits. Stormzy is thirsty and nothing looks like it’ll quench him. 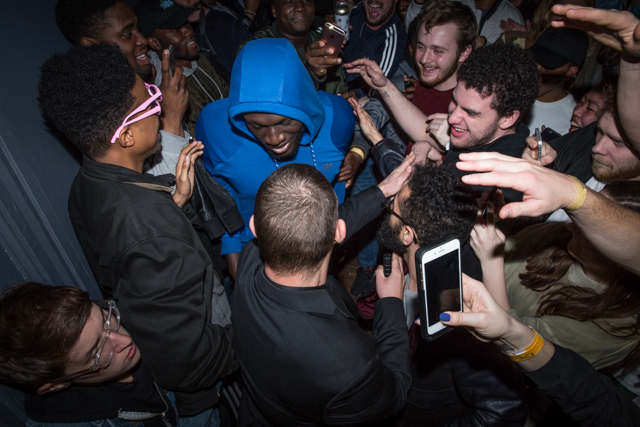 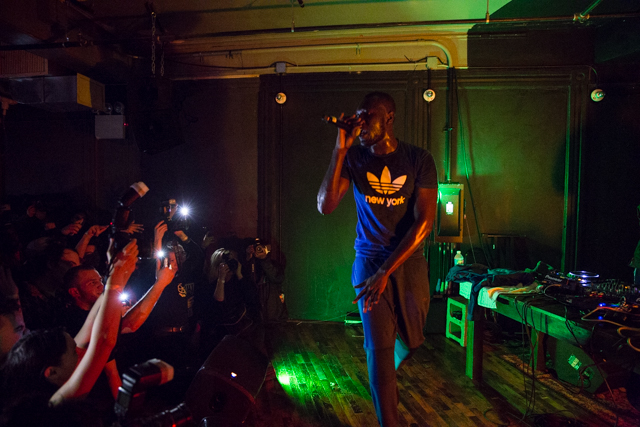 “This is a very historical occasion,” he says. “We are not going to let the soundman fuck this shit up.” Since grime’s unlikely New World explosion, artists’ New York debuts have turned into a cross between a final test and a coronation. Stormzy has already rolled through SXSW this week, and just last night he was in Toronto, but he admits this is different. Toronto would be welcoming “because of the Drake thing” and in Austin everyone’s up for a good time. New York is more punishing, more daunting, a more pronounced proving ground. It was the same when Skepta and JME rolled through town last year; kill a set here, after fans have been waiting years to see you in action, and the murmurs turn into a raucous noise. You establish yourself, create a market. At the same time, it’s already an accomplishment: You made it all the way here, across the Atlantic, to a sold out show. Freestyles you recorded offhand are being shouted back at you by New Yorkers. It’s tough not to enjoy that.

All this success only falls into place when you dominate your own patch, though. That domination is a part of Stormzy’s pitch: “These MCs wanna talk about Lord of the Mics,” he says in “Shut Up”, “You ain’t even lord of your yard.” Over the past year, he’s been a revelation, becoming a superstar in a now-booming grime scene in the UK and earning the right to push beyond its natural borders. At last year’s MOBO (Music Of Black Origin) Awards in Leeds, he walked away with Best Grime Act and Best Male Act honors, rewards for a year in which the mainstream were given no choice but to take notice. At home he’s selling out the 5,000 capacity Brixton Academy and getting love from BBC Radio 1, a pop bastion. 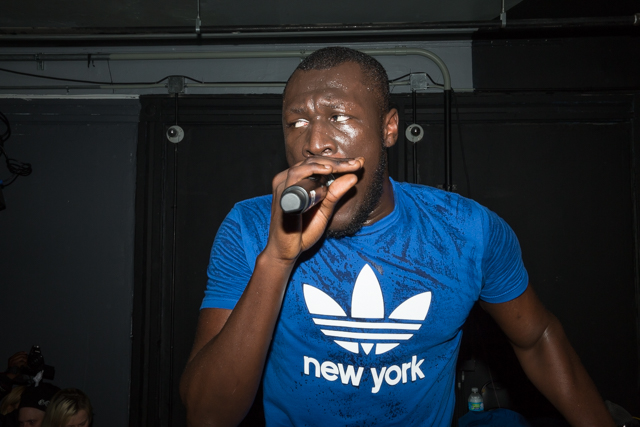 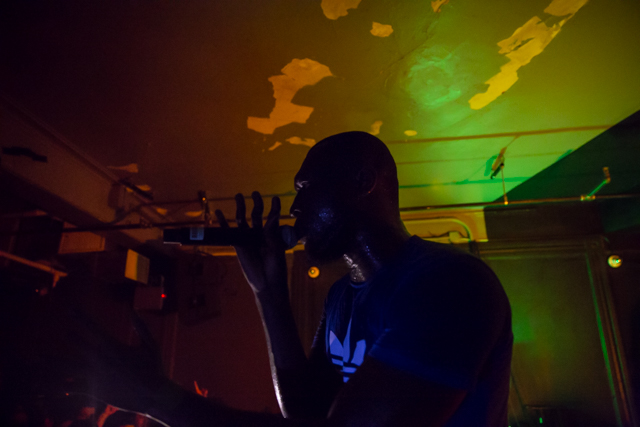 So now here is Stormzy, on a tiny stage in Bushwick, the J train coming to a stop a couple yards from the window, 300 hip kids and hip-hop heads skanking in front of him. The line between the newcomers and the die-hards faded an hour earlier when Tiny spun Tempa T’s seminal “Next Hype,” stopped the track after 30 seconds, and saw the whole crowd continue the song in the audio’s absence. Stormzy tells the crowd he wants the sizable London contingent and the New York majority come together “like a transformer” tonight. He’s sweating through his Adidas T-shirt, “New York” emblazoned on the front, trying desperately to push everything further.

And further everything goes. The mic goes up and the pit moves faster and Stormzy breaks into “Dude,” last year’s collaboration with Lethal Bizzle, a track built to rip through a club. “Walk in the rave with a smile on my face,” he says, grinning from ear to ear, knowing everything is finally starting to peak. His legs move in slow-motion across the tiny stage, but his arms are frantic, each bar an opportunity to chop and cut and land more sweat on the arms reaching towards him. 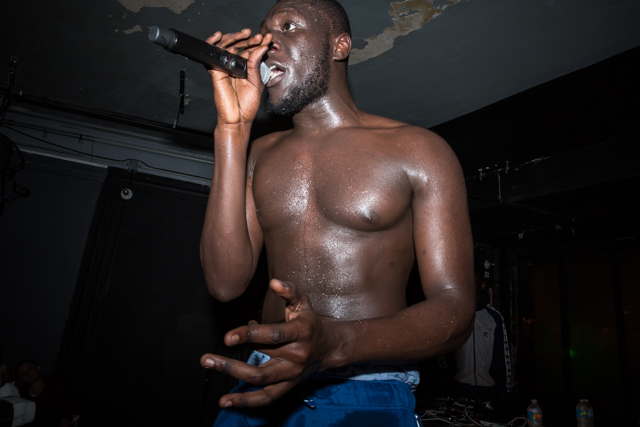 Moments like these have Stormzy in his element, coming in with uppercuts instead of squaring up. He can tear through tracks and then slow it down for “Gold Thoughts”—his reimagined “Bitch Don’t Kill My Vibe”—keeping the crowd on the ropes before he finally lays the place out.

Laying the place out means screaming that “This is not fire in the park, this is fire in Brooklyn” before launching into the effortlessly imperious “Shut Up”, his words simmering and dismissive. Then there’s the inevitable knock-out blow of “Know Me From,” a huge, dextrous, deeply funny song so packed with obscure British pop culture references that the American contingent’s knowledge of the lyrics makes him smile in disbelief. “I come to your team and I fuck shit up / I’m David Moyes” might catch on with a few, but it’s a beautiful and strange world that sees New Yorkers shouting back a line about British soap opera Eastenders. 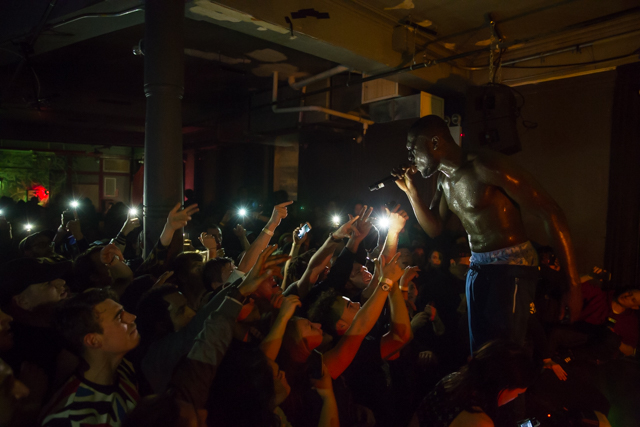 It’s a perfect illustration of grime’s impact: The trans-Atlantic conversation that the genre has sparked and the oddness it has brought with it is not only a marvel, but a seriously exciting precursor to hip-hop’s immediate future. Grime’s success on these shores is no longer a question, nor a matter of whether or not it will be embraced and respected. The crowds are still modest, but the excitement is not. With Drake’s recent symbolic signing with Boy Better Know records and Kanye’s fabled Brits performance backed by the scene’s top players, the question now is to what extent grime will bleed into the American mainstream and influence the next generation in New York.

Because, in the last year, the genre hasn’t left its chin open even once. It came to a head in December when Stormzy played to 20,000 people at London’s o2 Arena, standing inside a ring, introducing young London boxer Anthony Joshua for a heavyweight title fight. Joshua is young, lean, ferocious when he wants to be, and he’s still undefeated. He’s the world’s most exciting boxer; soon he’ll be on top of the pile. Stormzy introduced Joshua that night not because of local allegiances—Joshua is a North London boy and his opponent that night, like Stormzy, was from South—but because he saw something in common: Stormzy is still breaking new ground, still proving himself miles from home. But, like grime itself, he’s still very much undefeated. 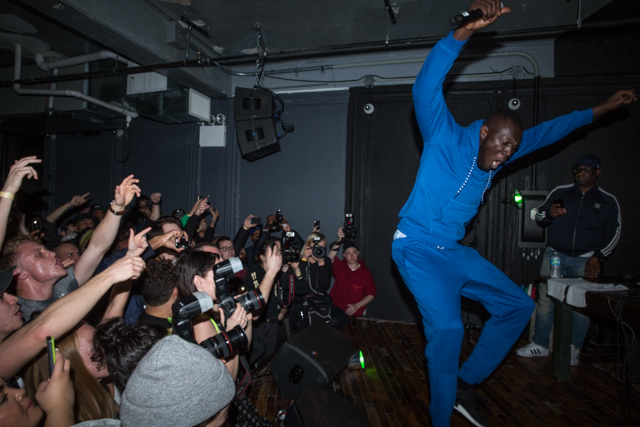 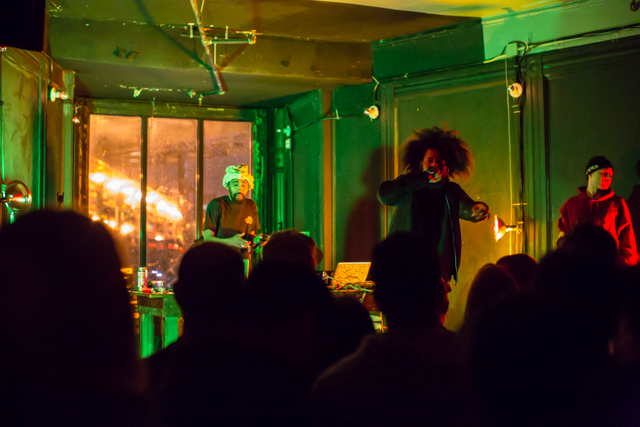 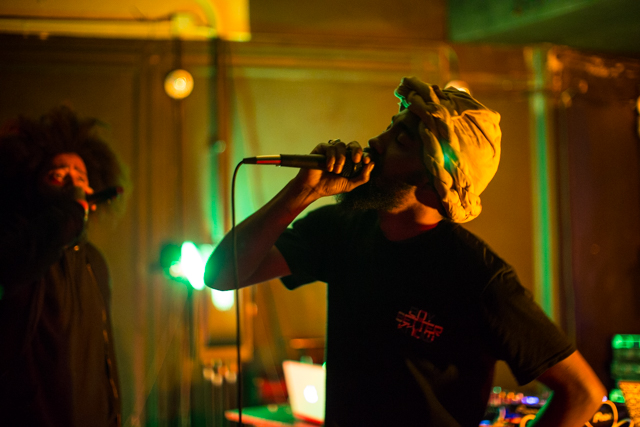