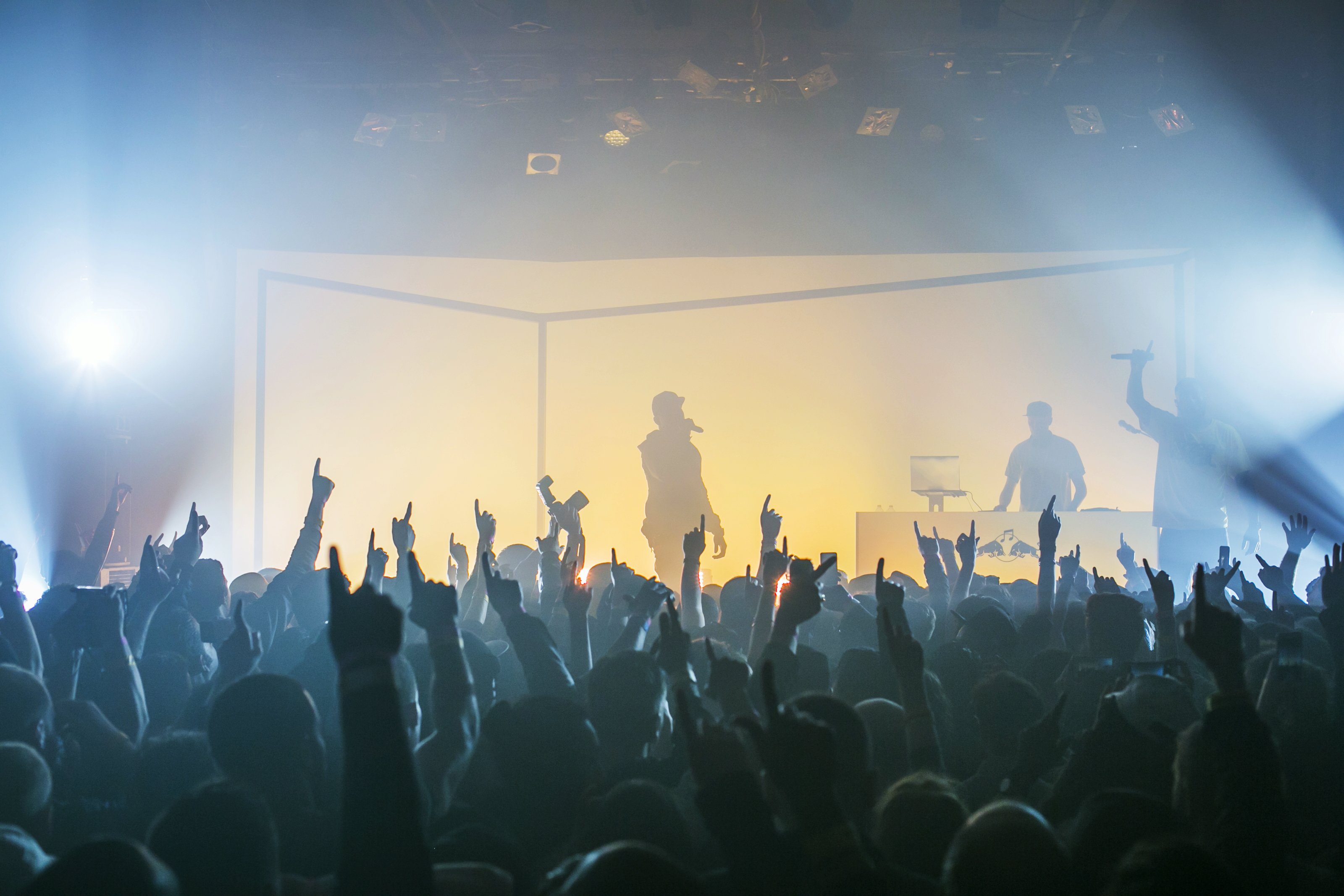 It’s become a mainstay of these shows in New York—a DJ spinning a combination of US hip hop and London-bred grime to warm the place up. Tonight DJ MK is mixing Kanye’s “Power” with JME’s “Man Don’t Care” before speeding Meridian Dan’s already frantic “German Whip” up to a frenzy above Kendrick beats. It’s not that the crowd filing into the Music Hall of Williamsburg needs its grime diluted and spoon-fed to it with the help of familiar Americanisms—the genre’s unrelenting rise in the US means we moved past that a while back. It’s more a case of familial respect, a grateful nod to the people that have been suddenly and overwhelmingly welcoming to their insurgent British cousins.

Tonight is slightly different, of course. This full, start-to-finish performance of Dizzee Rascal’s Boy in da Corner is set apart from, say, Stormzy’s debut show in Bushwick last month or Skepta’s first show at MoMA last summer. Bringing one of grime’s forefathers to the city to perform a seminal 13-year-old record shows that grime in America has gone beyond a fixation on the new. And that’s not to mention the fact that this show sold out almost immediately; it seemed to be the biggest coup that RBMA pulled off even with last week’s conversation with Spike Lee thrown in. With the genre edging ever closer to ubiquity (at least here in Brooklyn), recording and appreciating its history has suddenly become as important as basking in its newness. For grime’s style and aesthetic to genuinely wrestle its way into the canon, it has to have some sort of narrative, a collection of records and stories that go beyond the notion that the beats are “dirty” or the lyrics “hard.” Instead of being weaved into the American narrative and treated as a curious new subculture, it has to stand apart and be respected as its own convention, a sound that grew from comparable but still markedly different social and cultural circumstances.

And Boy in da Corner is a good place to start with that. Wiley may be the Godfather, but Dizzee got his debut album out first and had no small part to play in opening the floodgates. The record went gold in the UK, its singles broke the Top 40 and it won the Mercury Award for best British album, beating out fawned-over critical favorites like Hail to the Thief. It was game changing, revolutionary, completely out-of-the-ordinary in England’s mid-2000s troubled-boys-in-polo-shirts musical malaise.

So while Skepta dropping his brilliant LP Konnichiwa marks another step forward for grime’s acceptance in America, a performance of Boy in da Corner in Brooklyn is all the more important for that transatlantic narrative. 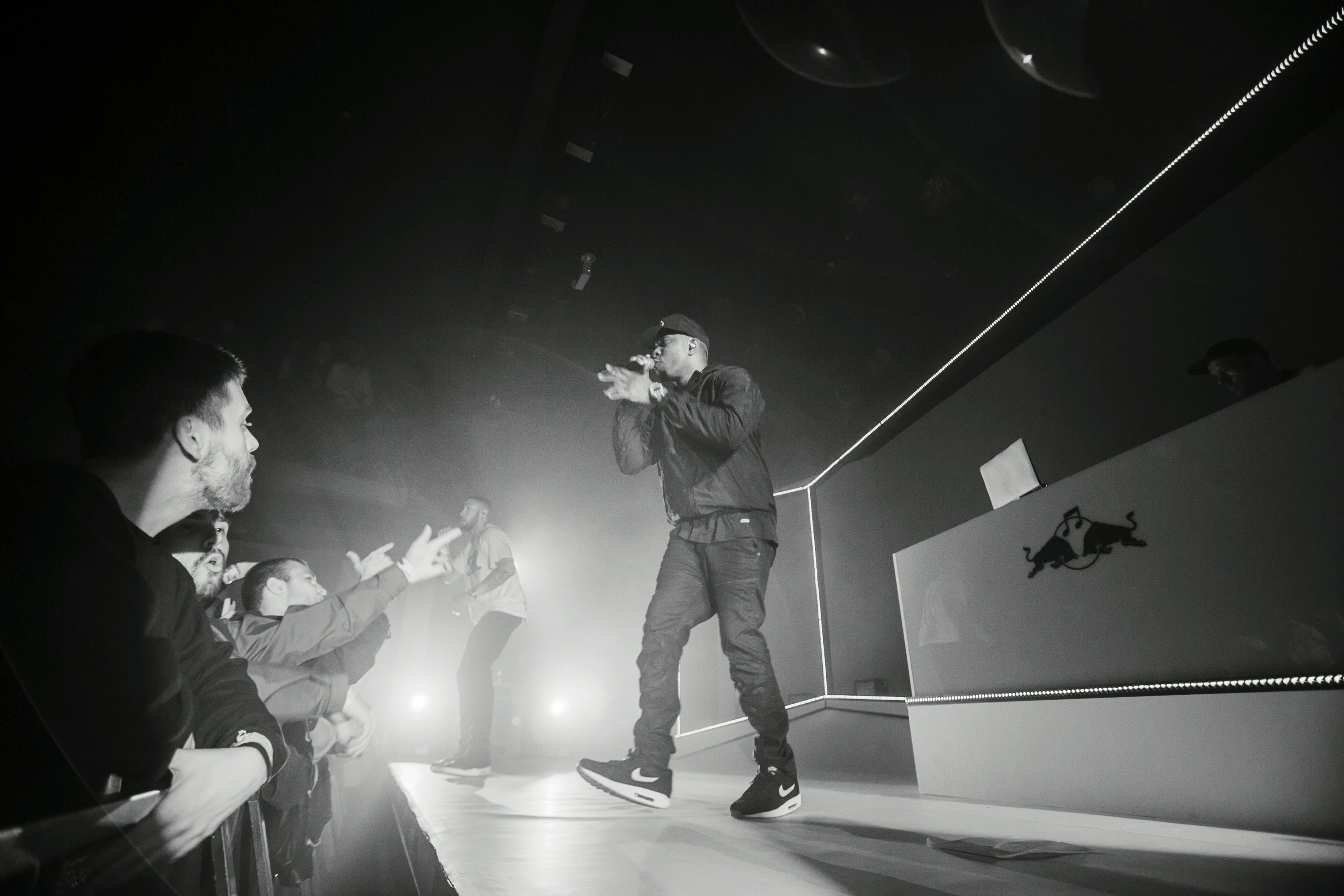 Besides, there are enough British accents ordering pints at the bar above MK’s set to suggest that this show carries some adolescent nostalgia along with it. Those accents are often more Hugh Grant than JME or even Michael Caine—closer to the family estate than the council estate—but they’re British nonetheless. Living in New York isn’t cheap and obtaining a work visa is borderline-impossible; the majority of those that make it out here either landed an internship at a company big enough to sponsor them, had a good enough lawyer to make a case for their value to America or, as with me, got accepted to one of the city’s cripplingly expensive universities. In short, the crowd at a grime show in New York City is always going to be more affluently middle-class than a show back home.

Which raises questions all of its own. “How could a man with a uni degree / Be bussing up mic and chatting his greaze?” asked JME in “Man Don’t Care.” “Cause the music originated/And will always remain in the streets.” It seems more like a plea than a statement in this context. My own presence here is proof enough of the fact that that’s a difficult mantra to hold on to, at least in the US. Grime’s still a long way from its own “White Privilege 2,” but shuffling into the canon means that the demographic will inevitably shift, at least in part. In an interview earlier this week, Dizzee said he liked the circularity of playing this show in this part of town—he played his first US show in Williamsburg in 2004 out the back of a flatbed truck. But Williamsburg’s a different place now (I’m told; I’m one of the ones that got here nine months ago). It’s shinier, richer, more densely populated by young people who wear sneakers to work with their suits before changing into heels or brogues at the office. 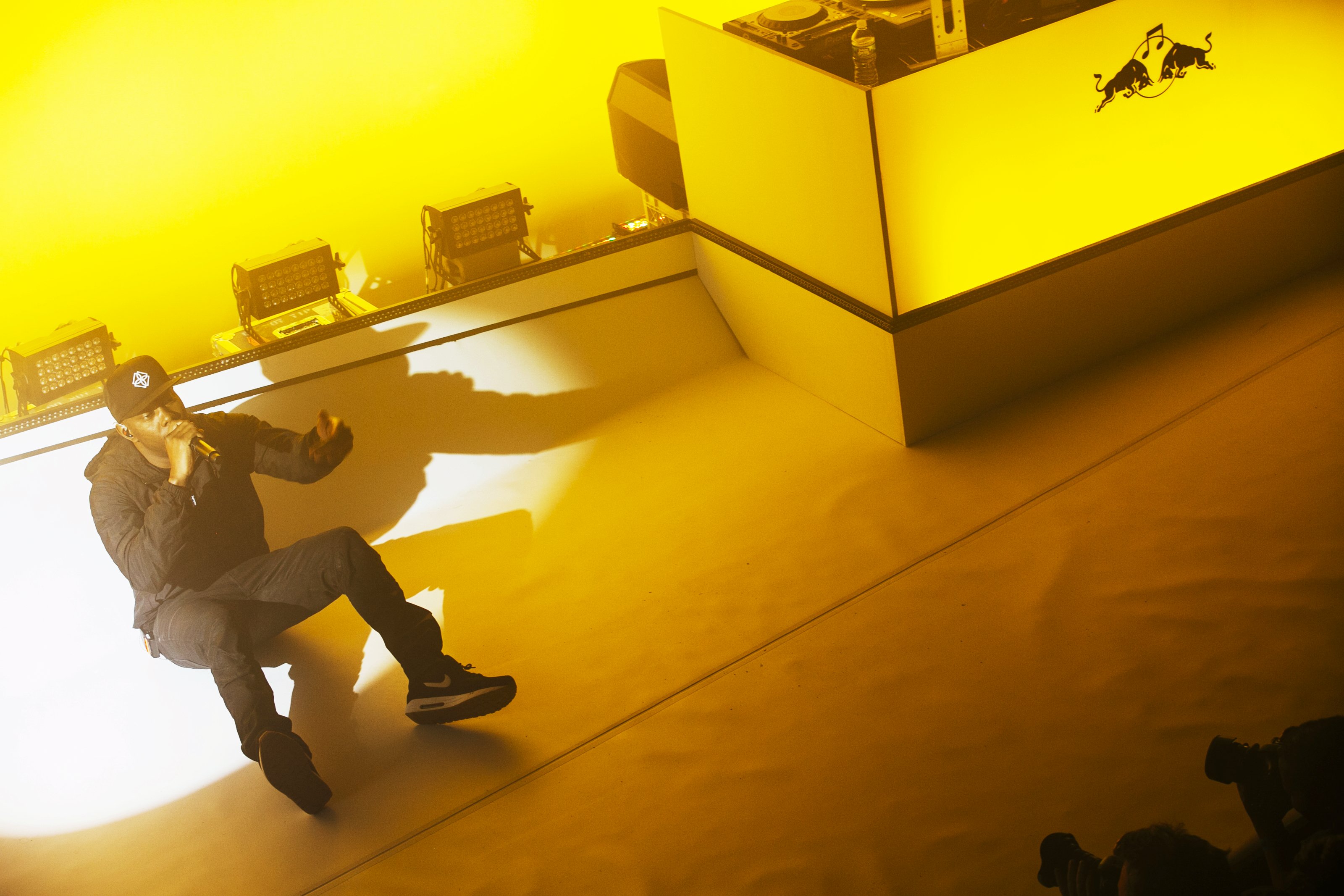 When the lights go down, though, these thoughts are pushed back. There’s Dizzee, crouched down in the corner again, the set behind him glowing yellow, a perfect simulation of the album cover that itself was simulated in the night’s promo posters. He’s a little older but he hardly looks it. He spits his introspection with the same conviction he did back then, too, asserting himself over the ominous hi-hat taps. The venue goes fucking nuts, arms aloft; some know every word off by heart, some are spitting back choice lines they’ve picked up from Spotify in the last three weeks, and some people just lose their shit without knowing a word. It’s that last group of people that dance with their eyes that bit wider, taking the whole thing in fresh. And fair enough. I heard this for the first time when I was 12 and I still haven’t figured it out.

Every preview of tonight’s show commented on Boy in da Corner’s persevering newness, marveling at a record that sounded as thrillingly futuristic back then as it does listening through now. Hearing it live, it’s impossible to shake that; it’s brash and dystopian, existing in a different universe to its peers. “Stop Dat” possesses the sort of naturally confrontational beat that most rappers would have done anything for if they’d known the cheat codes that Dizzee figured out; “2 Far” jabs away, its keyboard orchestra pulled back behind the simplest kicks and snares possible. That he produced the whole thing himself at the age of 19 is at once incredible and completely obvious—how else could his flow have worked so perfectly in tandem with the beats?

Think, for example, of how strange “Brand New Day” is as a piece of music. That ultra-simple, insistent melody that comes off as percussive as tuneful, seeming almost to run out of breath while Dizzee stays on course, staring more closely at his own mind: “Looks like I’m losing sight cause I’m looking at the future it ain’t bright / So I look out my window and pray every night / I thank God for my friends but they ain’t tight.” It’s as urgent on stage as it is on record, Dizzee pacing from one side of the Music Hall’s stage to the other. 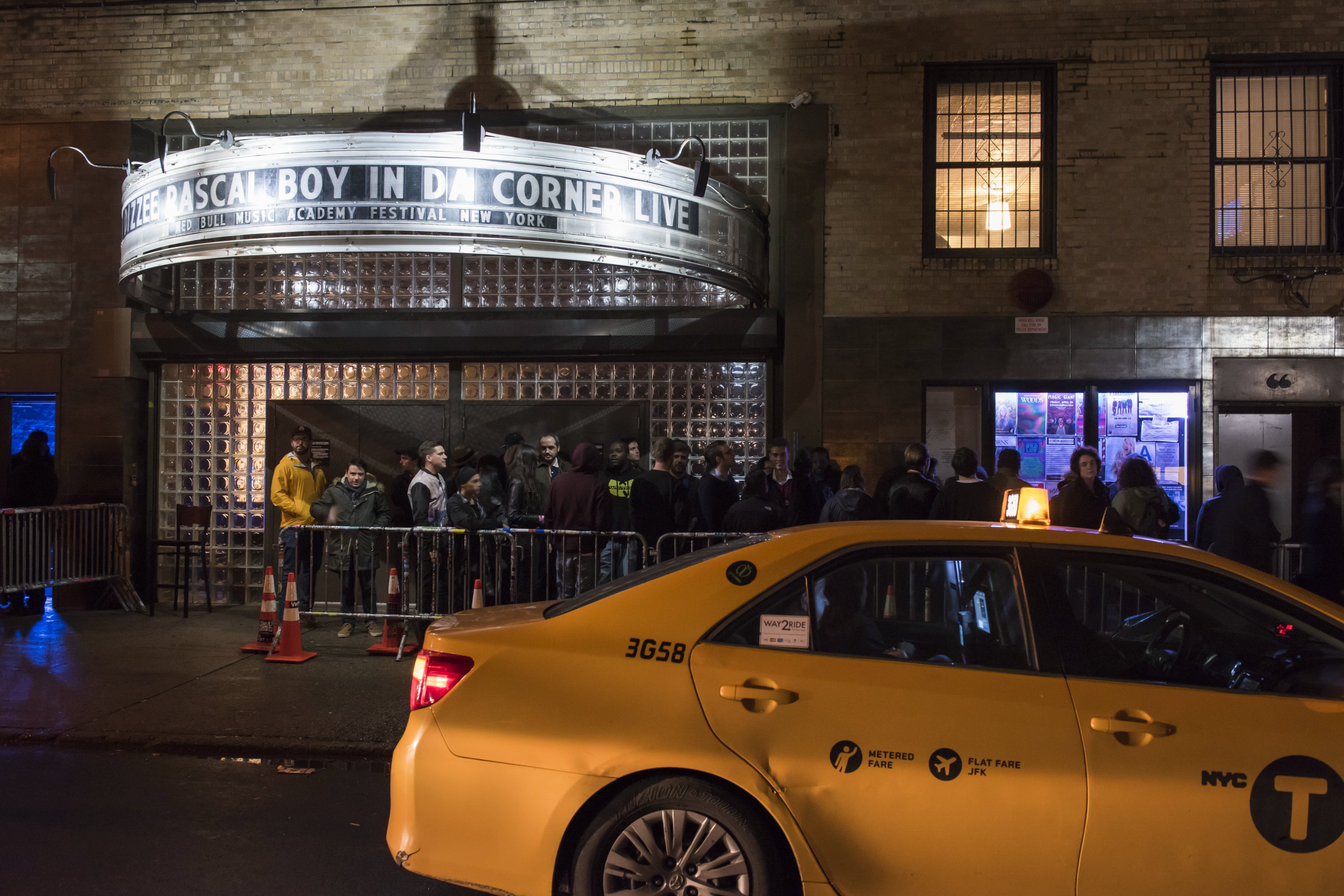 And for every moment of heightened introspection, there’s one of perfect release. “Fix Up, Look Sharp” is as big and brilliant as it ever was, Dizzee’s opening “Oiiii” still punkish and playful. That beat, its absurdly heavy bass drum a statement of its own, clatters into the room. And for full-on singalongs, the Billy Squire sample that makes up its hook is pretty much perfect. “I’ve got the big beat / I hear the sound,” while Dizzee giggles on. It’s way out of the crowd’s vocal range—I think it’s out of Billy Squire’s too—but it’s hurled back onstage anyway.

The other two singles, “I Luv U” and “Jus’ a Rascal,” are both greeted with such excitement that it’s easy to forget this is a performance of an album, in its original order, from front to back. But it’s “Jezebel” that gets the biggest response, the sound of a 19-year-old trying to analyze the women around him and coming up with the same sad story of fuck-ups and neglect. Grown men with sculptured beards seem know the words.

He’s genuinely grateful for all this. It’s not quite disbelief, but he means it when he says he’s thankful that people came to see him tonight. He takes just as much time as he needs between tracks to say his piece, but he’s quickly back into it, rifling through to the glitchy and confrontational “Vexed.” “I do the fuck what I want, that’s how I got here / And I’ll be damned if I let you fussies interfere.” No fussies, no interference—he’s a goddamned icon in this outpost of the New World. 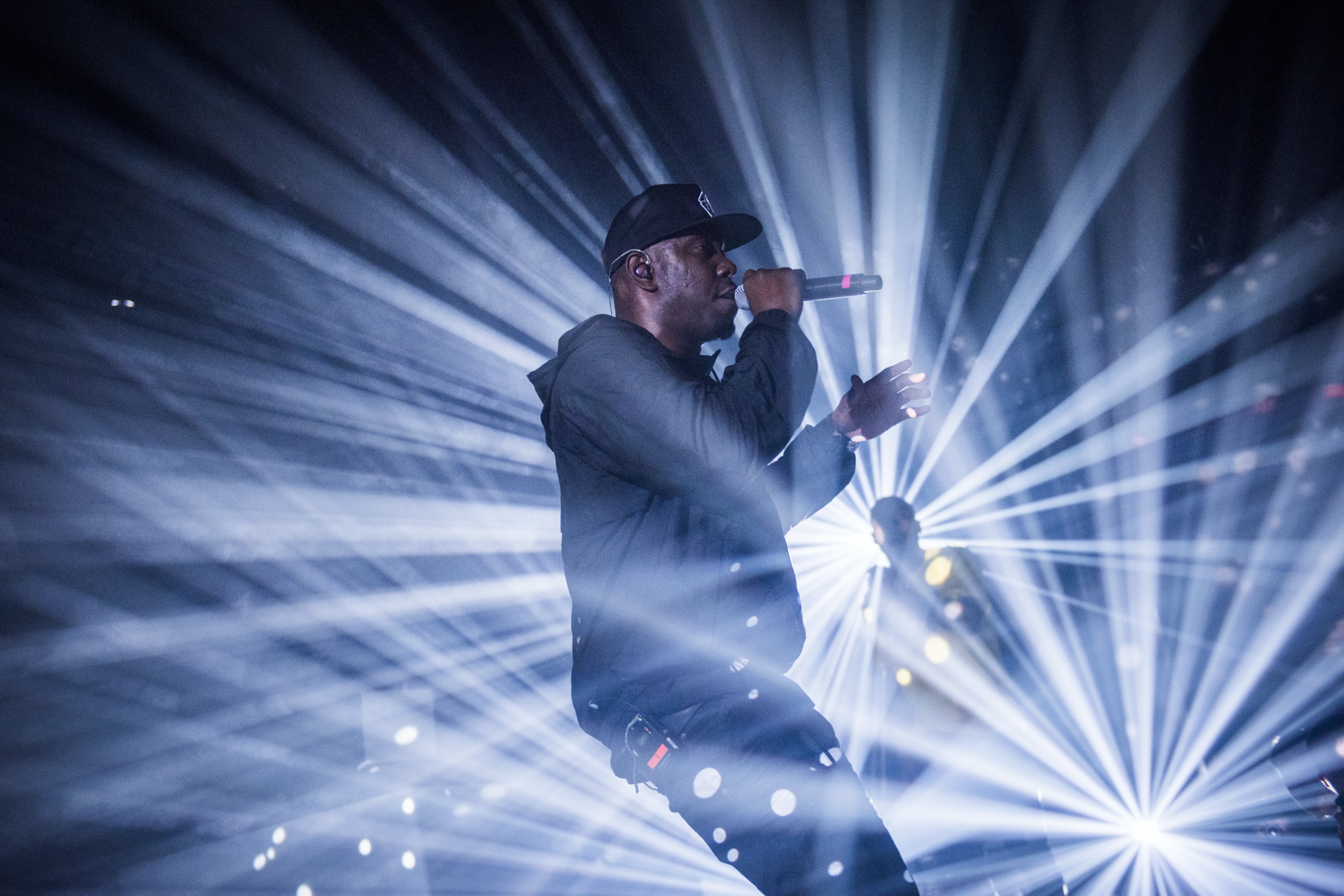 Outside, Stormzy gets out his iPhone and videos a Snapchat: “You mad?!” he shouts at his screen with a smile across his face. An awkward line forms near him, waiting for the recording to finish. Fans want to say hi, but nobody’s quite sure how. It’s old-fashioned fandom, hero-worship almost. What’s going through his head while he watches six hundred or so people stream out of the venue? Probably the same thing he shouted at his iPhone, running over and over again in his head: “You mad?!” With every passing show, grime in New York gets itself on to surer, more improbable ground. Lionizing one of its most important artists is just another step to the top.